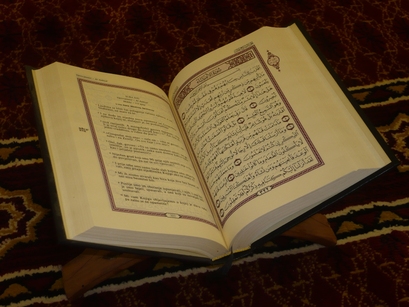 The  Qur’an means “recitation”. The Qur’an is best communicated by resuscitation. The Arabic version of the Qur’an is contain its full value, although it has been translated into many other languages. It contains God’s Word, which was recited by Muhammad, and memorized and written down by disciples.


The Qur'an is not a constructed argument that is divided into segments and it is also not a series or stories. It is a body of sermons, which naturally repeats images and themes. The Qur'an covers countless topics and refers to figures, which can also be found in the Jewish, and Christian Bibles such as: Adam, Eve, Noah, Abraham, Isaac, Jacob, Moses, David, Solomon, Jesus, Mary, and more. Sermons can be referenced in everyday life and refers to property rights, money, inheritance, marriage, and divorce. It refers to Muhammads life, but specifically religious beliefs and regulations such as: angels, divine judgment, fasting, and the pilgrimage.

The Qur'an contains 114 chapters, which are also referred to as suras. Every sura has a traditional name that came from an image or subject mentioned in it. Sura names include: "The Elephant," "Light," and "Smoke." The order of the suras, however, is not relevant to the order in which they were revealed. They are arranged by length: longest to shortest. The last chapters are very short and easier for beginners. The first suras are most likely the earliest teachings of Muhammad. Suras have been compared to leaves that fall from a tree. For example. the first leaves to fall are on the bottom.

The Qur'an has influenced Islamic art - so much, that handwritten copies of the Qur'an are famous artworks. These artworks often include golf letters and colorful designs. Often, words of phases from the Qur'an are incorporated into designs, which are used to decorate mosques and religious schools. In fact, passages from the Qur'an are carved in stone, wood, or set in mosaic on buildings.

Muslims enjoy the repetition of phrases and images from the Qur'an because it is comforting and they have heard them recited aloud in daily prayers and sermons since they were children. Passes are often recited on the radio and specifically during Ramadam. In some countries, they are also broadcasted on television.  Arabic is considered a beautiful language and chanting the Qur'an is considered a form of art.